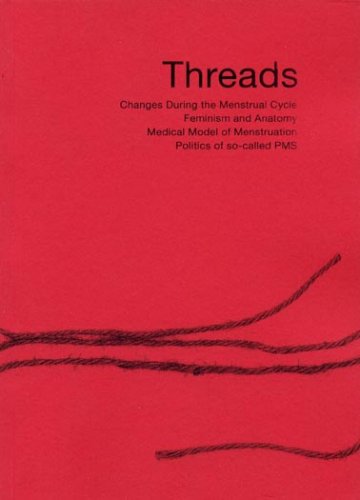 Edited and published by Lisa Fannen, 2007.

This little book took a long time to get to me, months, and the most of its journey it spent on a shelf of one bookstore in Zagreb. But as soon as it arrived, it opened up. That’s how it usually goes with gifts from friends.

Threads is a collection of texts edited by Lisa Fannen (2007). Its content is divided in four parts. Each of those four parts consists of texts that came out of workshops that were to exchange and talk about experiences concerning menstrual cycle and so called „PMS“ in a wider social, political and economic context. Interesting addition to each part come as excerpts from various texts, studies and researches, fanzines, personal  stories, poems, illustrations and pictures.

I suppose that great part of the contents is already familiar to most of us, but it’s interesting to go through it assembled all together once again.

The first part deals with the changes during the menstrual cycle. It offers general guidelines for monitoring the changes in the cycle from day to day. It explains in which ways cycle monitoring strengthens our bond with our own bodies and processes that take place in the body. By monitoring and observing these changes we get to understand our bodies better and it becomes clear that no doctor will ever get to know it and understand it better than ourselves. There’s no complicated science behind this, just simple observations in dynamics of various processes.  Tables include everything starting from secretion, position and shape of the cervix, changes in body temperature, fluctuations in energy levels, sexual desire, ovulation pain, food cravings, emotional sensitivity, dreams, abdominal bloating, breast tenderness, fluid retention, sweating, migraine, epilepsy, allergies… Those are all processes with more or less stably established dynamics which is easy to observe and interpret. Later on, third part of the book introduces even more detailed insight to these processes and brings to a highly valuable practical benefits of cycle monitoring as a contraceptive method.

Interesting addition to the first part of the book comes in testimonies of women and trans* people about their first menstruation experience, coping with menstrual cramps, needs for staying still or keep moving during menstruation, use of various „sanitary“ products while bleeding. Analysis of a historical tabooization in the media by the companies that advertise sanitary towels and tampons wrapping its        purpose in a veil of mystery is particularly interesting. It is ridiculous but concerning reflection of social understanding of menstruation as something that is not spoken out loud about or something that needs to be introduced with new terminology in order to eliminate unpleasant feelings, shame and body-spirit contamination.

The second part is an overview of the “female” anatomy and sexuality through history and different cultures with different perceptions of the human body. It includes a take on the understanding of the body by the western medicine that went through changes parallel with the changes in social conditions in Europe and its colonies. Following that is a take on the traditional Chinese medicine which uses the concept of yin and yang, terms such as warm, cold, dry, moist and similar ones, to explain a bodily condition. Then a description of the Walpiri language of the indigenous community of Australia with a very interesting logic and rituals of marking the parts of the body over the skin, performed by women, by which they emphasize their connection with the earth, animals and other species.

This section also includes a survey of different practices starting with cosmetic surgical procedures on the genitals of the newly born that deviate from the standardized norm of male-female combination of chromosomes, outer genitalia and inner reproductive system. Then follows female genital mutilation, circumcision and clitorectomy which along with being criticized by women who were violently coerced to the procedures, were often used in a racist demonization of cultures which have them in their practice, that is, non-western cultures. There are more examples, the variations of genital mutilation have no end, so I won’t list them further. This is less than a pleasant part, but very important because it deals with the consequences to the health of the persons that went through these procedures.

And, since we mention the subject of health, this section offers instructions for self-examinations which is valuable because it adds to self-awareness, control and responsibility which we realize in the relation with our body, health and life. Instructions and advice for self-examinations will save us the time of repeated trials and errors, whether taking a smear, performing palpation or something else is in question.

Again this whole part is enriched with great illustrations of the “female” anatomy with precise explanations of what is what and where is what. On the other hand, the last illustration goes beyond pure anatomy and presents a mula bandha, energetic lock located near the root of the spine and the center of the pelvic floor. Getting to know mula bandha leads us to yogic techniques with which we regulate energy flows in the body. Explanation that accompanies the picture is very short with the comment that the area is very difficult to isolate in practice. Truly, if we are just staring with yoga practice the search for mula bandha can look like a never ending search for the holly grail.

The third part takes us deeper into the details of western medicine and its view on menstruation. It problematizes this model of menstruation and explores different concepts which preceded establishing the reductionist western medicine. Great deal of the third part deals with the critique of the early endocrinological researches and introduces the concept which polarizes so called „sex hormones“ to „female“ and „male“ which are alleged chemical messengers of „femininity“ and „masculinity“. We see that with the discovery of the hormones, the idea of the opposed social roles of men and women defined by their biology had only been perpetuated.

Besides historical overview of the development of endocrinology, this part introduces the development of Luna yoga by Adelheid Ohlig. And so the story goes as far as the nuns in Buddhist convents that practiced the exercises to stop the menstrual cycle forever.

According to Adelheid Ohligs’ story, the journalist who was associate of a physiotherapist and dancer Aviva Stainer, Luna yoga was developed in a very empirical way. It relates to the influence of the Lunar phases to the phases in our moods and changes that take place in our bodies.

Aviva had worked with a large number of women of various age groups. She noticed the absence of menstruation at young women that took part in very intense physical activities. While older women with whom she worked on a program of physical activities in a retirement home, had reported to her that they were bleeding again.

Aviva and Adelheid resumed the results and benefits of the regular Luna yoga practice: stimulation of ovulation and menstruation, strengthening the muscles of the pelvic floor, reducing pain and cramps before and during menstruation, relieving symptoms of menopause, regulation of sexual drive and orgasm, reduction in precancerous cells number, elimination of cysts etc.

And this book does not stop here regarding yoga. It follows one more example of a study that observes the relationship of yoga and health and it takes on a research conducted in the Indian city of Bhopal.

In the year 1984. in Bhopal pesticide factory came to a leak of a poisonous gas and industrial catastrophe which as a consequence had a death of at least 8000 people and half a million with severe health issues. Toxic chemicals quickly leaked into water supplies. Women that were exposed to them reported issues concerning menstrual cycle, especially pain during menstruation caused by uterus spasms due to the changes in hormonal secretion affected by toxins.

Research that had been undertaken in secrecy on two groups of women lasted for six months. The test group was doing yoga and they didn’t take any medicine, while the control group was taking prescribed medicine and did no yoga. Both groups were trained to take notes about the cycle, illiterate women used graphic symbols to fill the charts. They took notes on length of the cycle, intensity of bleeding, pains, weaknesses, giddiness, lack of appetite, depression…

Women in the test group practiced a set of asanas that was conceived with a goal to balance the nervous and endocrine system. Asanas were focused on the pelvic area, uterus and ovaries. From the addition in photos, I would estimate, that it didn’t take longer than half an hour or one hour to work through the given set of asanas.

The fourth part takes on the politics of the so called premenstrual syndrome and sets on important questions!

The history of medical treatments of so called PMS start nevertheless with the use of the x-rays for taming the ovaries. The inventor of this „cure“ is Robert T. Frank (1931). Researches that followed afterwards monitored only and exclusively the correlation between the hormones and emotions. Relevant medical studies pushed forward the theories which influenced the way of thinking in a wider population, and they all came down to setting the biological bases for numerous stereotypes about women as creatures wonderful and lovely by nature that once a month spit with rage for no obvious reason. Cyclic changes thorough which women were going were treated as hormonal disbalance that is to be corrected namely cured.

During the 1970s researches were going towards discarding PMS as hormonal illness and the whole story began to highlight social, cultural and symbolic components. Present-day approach is mainly focused on suggestions and advices on nutrition, physical activity and relaxation.

Exceptionally good addition to this part is based on statements of women about their feelings during PMS: I enjoy the melancholy and my thoughts, I feel very creative in that period, I dream more than usually, I feel more sexy, I put more quality in work, my thoughts are clearer and sharper, I feel love towards everything that surrounds me.

I personally have way more energy for yoga practice, and I feel the practice more intensely in every way. Asanas are understandably more accessible because of the increase in body temperature, while additional heating is being provided by vinyasa and ujjayi breathing. My focus is sharper, the movement brings me into meditative state faster and easier. Once there, I want to stay in that state.The feeling is very pleasant, healing and it becomes harder to stop. That is why ashtanga vinyasa yoga is a remedy that needs to be dosaged with caution.

Therefore, unlike widespread belief the so called PMS is not only rage, nervousness, sweet craving, depression, lethargy, headache and lumbago. The cause to such feelings should be looked for in deeper social problems closely related to a womans role provided by the patriarchal-capitalist society, rather than in biology.

At the very end, after the fourth part, there is a long list of questions regarding menstruation, menopause and general health, which is a part of the „Mass Observation“ archive at the university od Sussex. Some of the answers are possible to provide only with thorough thinking and contemplating.

The book is high on abundance of various sources of literature and reading recomendations. It is done in a fanzine style, cut&paste and it is printed on white chlorine-free paper. It is not-for-profit publication and it is free to distribute. If this was enough to get you interested, the book is available for download at www.threadsbook.org

No gods, no gurus