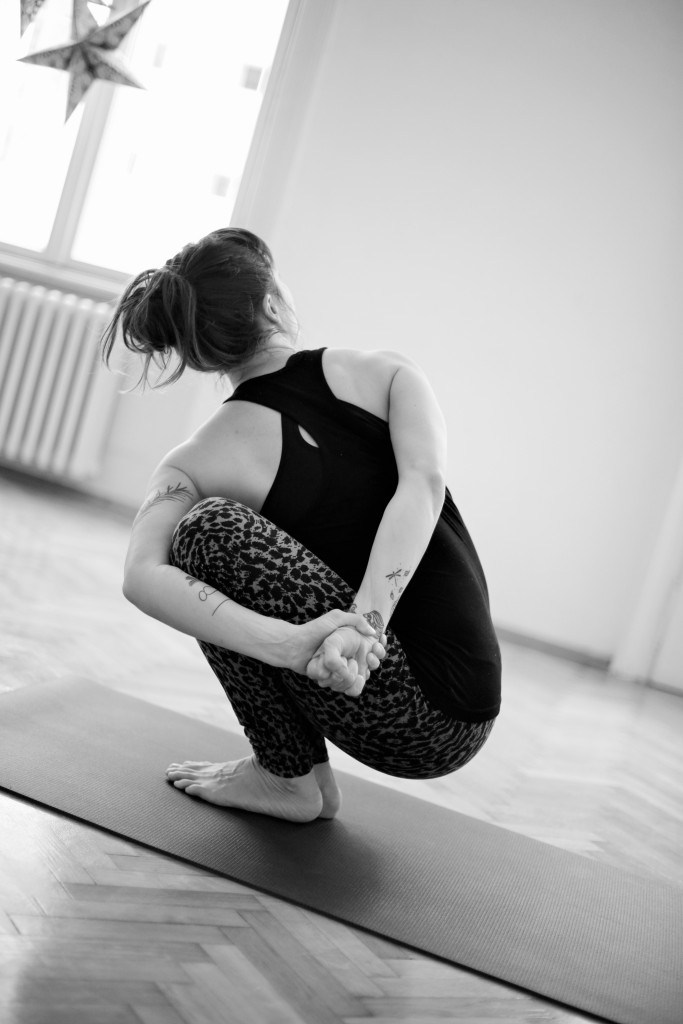 Name of the posture: Pashasana

Noose refers to the position of the arms looped around the legs. But Pasha also refers to one of the many Shiva’s names. This is the first posture of the ashtanga yoga intermediate series. As many of the postures of the intermediate series, it is an upgraded version of the primary series posture. In that sense, some practitioners see it as more intense utkatasana. Some like to see it as double Marichy C, since we wrap the arms around both legs at same time. Some see it as a combination of those two postures.

The apanic effect of pashasana is the strongest one I have ever felt in any of the postures. To put the yogic terminology aside and to explain this more precisley, so someone like my mother who started practicing yoga with no previous experience at the age of 62 can also understand it – when I first started to practice pashasana, I remember it’s strong downward pull causing a really, really strong urge to run to the toilet for a big one! Full flexion of the hip joint, which brings ones knees to chest and thighs pressed against the abdomen, combined with a deep twist and binding of the hands, governs the feeling of being pulled into the ground. Almost like dug deep down, that’s how strong and grounding it feels. Once the balance is gained and maintained, the struggle seems to be over and upon the inhalation we are able to feel the elongation of the spine, the spreading of the ribcage and the collar bones and the opening of the chest across the sternum. There is a counter flow being restored. Holding pashasana gives one a strong sense of being firmly grounded and the opposite force arising should only be as strong as the grounding one. Those opposed forces of the equal intensity and the same absolute value, give a great energetic mish mash sensations.

Being the first posture of the intermediate series, pashasana’s task is to set the grounding for what’s to come. And what’s to come can tear us apart and pull our hearts out if we’re not well grounded. Shalabhasana, bhekasana, dhanurasanas, ushtrasana, laghu vajrasana, kapotasana and supta vajrasana. Performance of those postures can bring one to an emotional discharging by seemingly unexplainable and unstoppable crying. So, facing those moments of life’s hard times or just postural, asanic hard times, we should make sure to ground well and ground deep before we bring our feet back above the ground with vinyasa and the back bands of the intermediate series. Compared to pashasana, vinyasa and the back bands have a lifting quality. Have patience with pashasana, give it time, it’s a complex posture requiring a lot of flexibility and a lot of strength. Strength should come from the core, oblique and rectus abdominis muscles. Flexibility is needed in the Achilles tendons, calves, hips, shoulders, intercostals, thoracic spine… Will not go into technical details of performing this posture, but much of it depends on bodily proportions, length of the arms, legs, femur bone and the spine. A person with long legs and long arms might easily bind in pashasana, even if they’re not so flexible. And a person with shorter femur bone opposed to the length of the spine might have difficulties binding even if they’re more flexible than the long-legged one.

Patience with rooting down. As one friend nicely pointed, whatever’s been cut down by repression, down to it’s roots, easily grows back up again like mushrooms after rain. Of course my friend didn’t talk about pashasana, asanas nor mushrooms, but rather about certain ideas. Anyways, I made an excuse to use this metaphor just because I like metaphors and I like recalling that summer’s night with friends in the park for old times-good times sake.