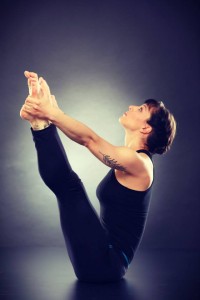 Mirela was first introduced to yoga in her secondary school in the year 1996. With the help of different teachers of hatha, maharishi and Iyengar yoga, she explored asanas, movements and breathing techniques. Further research led her to an encounter with the ashtanga vinyasa yoga. From 2013. to 2015. she worked at Ranko Stoiljković’s school in Belgrade. That work was reflected in assisting in everyday Mysore classes. She continues her further studing of ashtanga yoga in India. In the meantime, 2016, she completed the intensive course for ashtanga vinyasa yoga teachers with David Swenson. She is certified yoga instructor of Vidya Yoga School. Besides teaching group and individual classes od ashtanga and yin yoga, she organizes educational courses and workshops in a field of manual assistance and adjustments into yoga asanas and Thai yoga massage.

Both on and off yoga mats, the focus is breath, followed by movement. That is ashtanga vinyasa yoga.